Reasons- Why Himalayan Salt Lamp is Essential to Make your Bedroom Ideal?

Himalayan salt lamps are some of the most popular accessories that are used for the decoration of modern homes. They are made from natural salt rocks that are mined from the Himalayan Mountains in Pakistan. When mining the salt rocks, the large rocks break into different shapes which are known not to be similar. A feature of the Himalayan salt lamps that makes it easy to differentiate between the authentic and the fake ones is the crystalline structure. When buying salt lamps, you should check on the crystalline structure of two or more so that you can identify if they are authentic or not. It is said that there are no two salt lamps that are similar in their structure despite being mined from the same location. If you find two salt lamps that have similar crystal structures, you should be wary of what you are about to buy. In modern society, Himalayan salt lamps are used for the purification of air within homes and other living spaces. The purification mechanism works in that the salt lamps when heated produce negatively charged ions that attract floating dust and pollen particles.

The surrounding air is then purified from any dirt particles among the atmosphere suitable for people who are asthmatic. Also, the Himalayan salt lamps are useful in deodorizing the air by removing bad odors that may make it unconducive and inhabitable. For most homeowners, they prefer having Himalayan salt lamps in their bedrooms among other locations in a house. If you are wondering about the benefits of having the real Himalayan salt lamps in our bedroom, this article discusses the actual benefits that you will enjoy by doing so.

The interior décor of a modern house should always be attractive and elegant. Most homes of the 21st century are decorated with many accessories making them look unique and flashy. Himalayan salt lamps are great additions to your interior décor when you want to introduce a warm and ambient atmosphere. Since your bedroom space should be comfortable than most rooms of your home, adding the real Himalayan salt lamps can help to enhance the interior look. The salt lamps are mostly placed on nightstands so that they can look attractive and be the center of attraction in the bedroom. If not placed on the nightstands, they can be hanged on the bedroom walls at strategic positions. Having bad odors in your bedroom can create an uncomfortable environment. Many people use air fresheners to ensure the rooms remain fresh and are comfortable to live in. Within your bedroom, you can use deodorizing agents to help in removing bad odors. Himalayan salt lamps are the best accessories that can help you to deodorize the air effectively.  Usually, when you place the salt lamp in the bedroom and turn it on, it ends up absorbing the particles of bad air from the air. Since this is not visible with the naked eyes, the effect is felt when you enjoy the fresh air that is odor free. If you have constant problems of bad odor in your bedroom, you should consider adding a Himalayan salt lamp to make it more conducive. 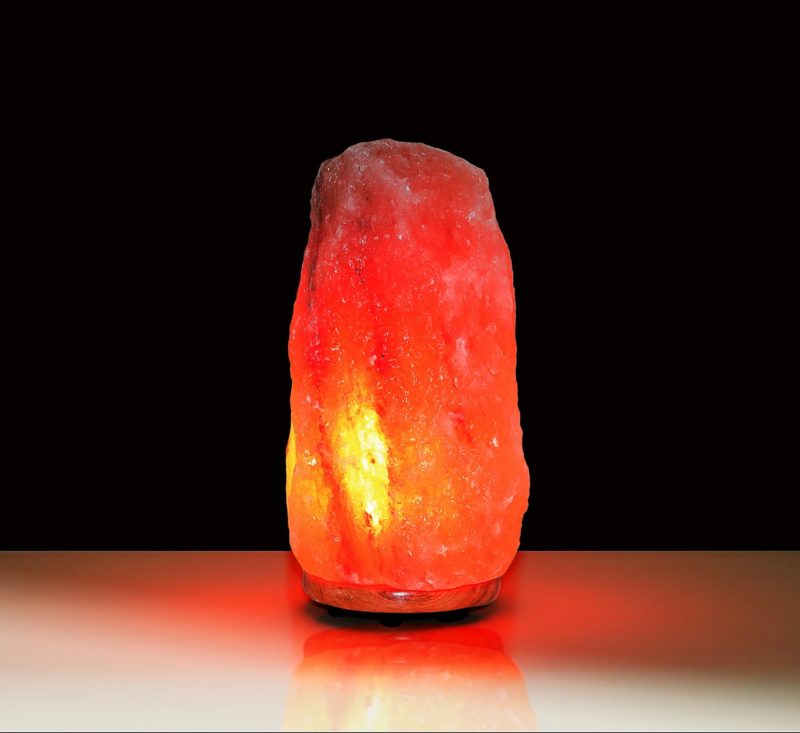 Remove Charged Particles From An Air Having a humidifier within a bedroom can be energy consuming. Air conditioning systems provide homeowners with a humidified environment so that they can rest or work in comfort. When you have a humidified bedroom, you will feel more relaxed and with positive moods. It is possible to have a high level of humidity in a room if you have a real Himalayan salt lamp. Real Himalayan salt lamps can be identified by checking their origin and crystal structures. For those that are real, they are hygroscopic. They absorb positively charged water droplets from the surrounding air. The water accumulates at the surface of the lamps. When the lamp is switched on, the heat from the bulb reaches the surface of the lamp, and the water droplets get heated t evaporation. This is a continuous cycle, and when the water accumulates into the atmosphere, the bedroom becomes humid and comfortable. Bedrooms that are more humid may have more Himalayan salt lamps since you want to create an environment that is comfortable for you. Blood flow to the brain is an essential factor that should be considered by individuals who would like to improve their level of concentration. If you have a work desk in your bedroom, you might need to add a real Himalayan salt lamp that will help you to improve blood flow to your brain for improved concentration. Usually, the more concentration you have when working, the more productive you are. The best remedy to improving the level of blood flow into your brain would be to add the real Himalayan salt lamps to your bedroom’s interior. The Himalayan salt lamps should be well stylishly shaped and installed so that you do not make space look clumsy. The science that explains the working of the salt lamps to improve blood flow to the brain is linked to the negatively charged ions that are produced by the lamps. When they and on the skin of the people around, they trigger the production of serotonin hormone thus increasing blood flow to the brain. Stress is a primary factor that results in depression among many modern homeowners. Many stress factors could lead to depression if they are not properly checked in the initial stages. If you are living with stress and you would want to get rid of it naturally, the Himalayan salt lamps would do the trick for you. The negatively charged ions produced from the surface of the lamp accumulate on the skin of the people around and result in increased blood flow. When there is increased blood flow in the body, there is also a better supply of oxygen to the brain. When the brain is properly oxygenated, there is a possibility of reducing the levels of stress that you may be experiencing. When choosing a Himalayan salt lamp for the reduction of stress, ensure that you check on their authenticity as the fake ones could have negative effects on you. In modern society, there are many electronic devices and gadgets that we use every minute. In the bedroom, you can have a television among other electronic devices surrounding you. They all produce electromagnetic radiation which is not easily detectable without special technology. Due to this, they can be harmful to human health if not well managed.  For most individuals, they may look for alternative ways to reduce electromagnetic radiation within their bedrooms. However, Himalayan salt lamps are affordable accessories that you can use to rid the air in the bedroom of electromagnetic radiation. This means that if you have real salt lamps, you will not need to worry about radiation affecting you in the long run. Mostly, the salt lamps should be placed closed to the electronic devices so that they can effectively reduce the effects of the radiation. You may decide to include more than one lamps to make them effective. 7 Tips to a Cleaner and Safer Bedroom 7 Benefits Of An Ottoman Bed What is The Softest Material for Duvet Covers How Different Design Elements Impact the Organization in Your Bedroom

Spring Cleaning Your Home Office? 4 Items to Get Rid Of