Instagrammable Exteriors: What is the Portobello Road Effect?

Instagram is known for its perfectly filtered, aspirational shots of sunsets, lattes, and ‘outfits of the day’, but it’s also a hub of home design inspiration.

While interiors often get most of the attention in the hashtags, a perfectly proportioned, colourful exterior is many influencers’ favourite photoshoot backdrop. Some Notting Hill residents recently complained their streets are being turned into “personal photo studios” for Instagram influencers going from one outfit change to the next. Instagram stars are so keen on the area’s picturesque flats and houses, they’re reportedly cluttering up the pavements for the sake of the perfect shot.

Some might want to keep their home’s exterior away from Instagram, but plenty of us look to it directly for inspiration. According to a new study into home improvement motivations by London property maintenance experts Aspect, 29% of UK residents say they’ve invested in making their homes more Instagrammable in the past two years. There’s an unforeseen side effect though! 20% of those surveyed also think one of their social media followers has copied their home improvement ideas after posting them on Instagram.

Researchers have named this design mimicry the “Portobello Road effect”. As exterior design ideas spread, (for example, one neighbour notices another painted their door a brave colour), whole rows of houses can adopt a photogenic consistency. 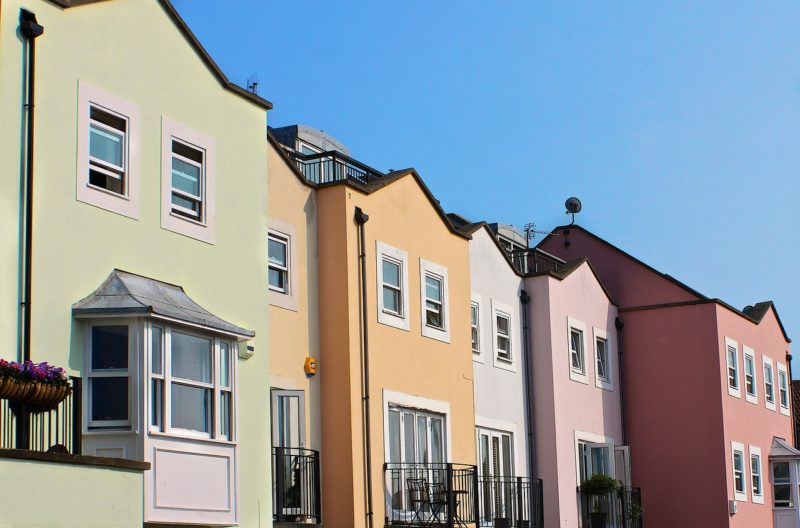 It’s named after one of the iconic Notting Hill streets known for attracting background-coveting Instagram photographers. One of London’s most established street markets, it’s also known for colourful houses and symmetrical Victorian terraces. The iconic 1999 Richard Curtis film of the same name also doesn’t do its image any harm. This approach to exterior design might bring influencers flocking to your doorstep, but it can also have a positive impact on house prices and saleability for you and your neighbours. Notting Hill is one of London’s more expensive neighbourhoods, with average sale prices falling just short of £2 million according to Rightmove.

Social media is one of the main motivators, but not the biggest. The two main drivers for home improvements and maintenance still happen offline. Residents in Manchester, Leeds, and London are the most likely to take inspiration from a neighbour’s new extension or renovation, while Birmingham, Liverpool, and Edinburgh residents are keen to talk to tradespeople directly. Manchester, Brighton and Hove, and Aberdeen homeowners show the most interest in examples on social media.

Aspect’s director of operations Nick Bizley thinks “it’s great for the tradespeople we employ that UK residents still show so much pride in their homes.” “The study identified enterprising tradespeople as one of the biggest motivators behind people catching the home improvement bug and it makes complete sense. A tradesperson can make significant savings on travel, and bulk buy materials more easily, when working on neighbouring homes. The resident gets great work at a lower price, the tradesperson cuts their costs, and the local neighbourhood benefits too. It’s a win-win.”

Building it Up: How to Grow a Successful Construction Business Tips for Decorating Your Home’s Exterior Exterior Areas of Your House That Need Some TLC This Winter