A Country by Country Guide to the World’s Favorite Houseplants

We could all do with more plants in our lives. And not just because they look pretty. A 2016 study revealed that having more than three indoor plants in homes or businesses enhances people’s mood and sharpens their concentration levels. In other words, plants make us better people.

So given how important these little pieces of green are to our well-being, HouseFresh decided to find out what plants we love the best. And using data collected from Instagram and keyword search tools, its designers made the following maps showing every country’s most popular houseplant. 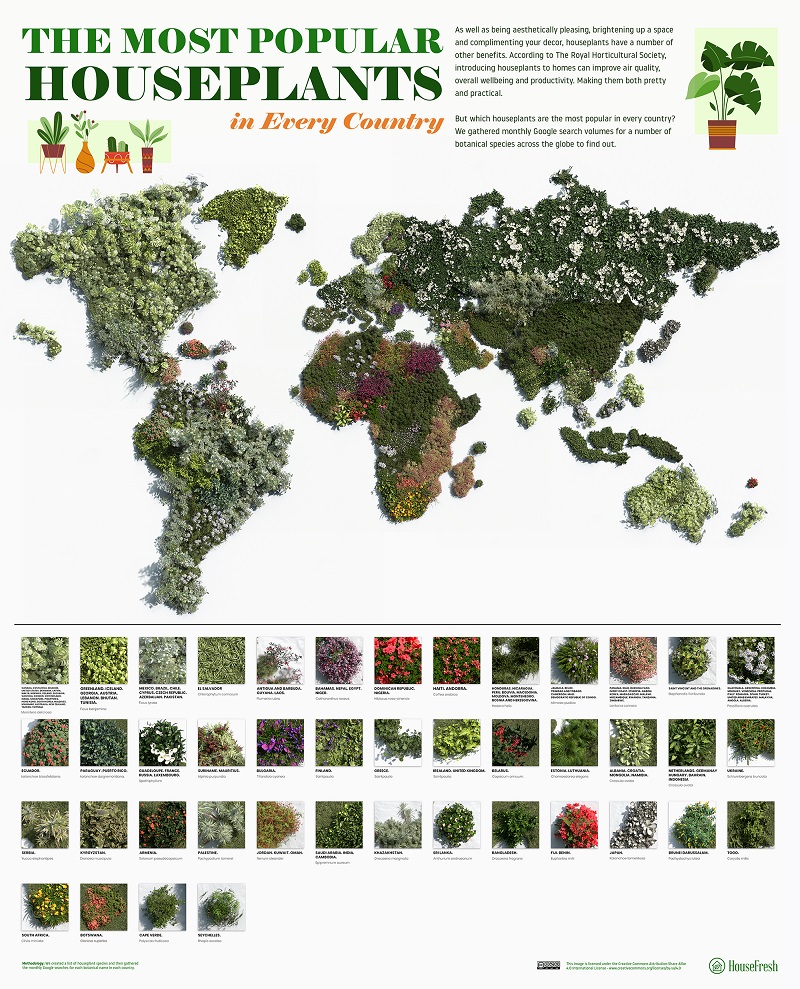 The Monstera Deliciosa is the number one houseplant in North America. Monstera derives from the Latin monstrum, meaning monster. The name may have something to do with the plant’s scaly, reptilian textured leaves, although the exact origin is unclear. It’s also known as the Swiss Cheese Plant. But peckish cheese lovers might be in for a surprise. Despite its nickname, the plant tastes similar to pineapple or jackfruit.

The Blue Passionflower is top of the potted plants south of the American border. The name has its roots in South America’s deep Roman Catholic tradition. It’s said to reference the crucifixion of Jesus – also referred to as the Passion of the Christ. Europe is another continent where the Swiss Cheese plant dominates. It’s the most favored plant in ten European nations. And yes, that includes Switzerland.

Second place belongs to the Hedera Helix. More commonly known as English Ivy, it’s an aesthetically pleasing indoor plant that is easy to cultivate and maintain. The Middle East and Central Asia

Plant lovers across the Middle East and Central Asia can’t get enough of the Nerium Oleander, making it the most popular house plant in the region. Known simply as the Oleander, this evergreen shrub appears in paintings and writings from some of the earliest civilizations. But pet owners and parents with little ones should be wary of bringing this plant into the home. It’s highly toxic for cats, dogs, and toddlers.

Our old friend, the Monstera Deliciosa, makes another appearance on the list of the most popular houseplants in Asia and Oceania. It’s the number one plant in 11 countries, including Singapore, Australia, and New Zealand. The Lantana Camara is the number one potted plant in 12 countries across the African continent. But despite its popularity and exploding shades of red, orange, and pink flowers, many Africans consider this pleasant smelling plant a weed. This is due to its persistent (and some would say stubborn) nature. The Lantana will grow almost anywhere. And once it lays roots, the Lantana spreads fast. Cape Verde’s winner, the Polyscias Fruticosa, is a house plant in name only. It grows up to three meters in height and has fern-like leaves that look like something you’d find on a winter tree.

Life is better with more plants. So use these maps to pick out some potted delights to brighten up your home or workspace.

Ways to Decorate Your Windows The benefits of plants in our everyday life